Ordinarily I try to refrain from spending too much time discussing today’s “artists” because really, why bother? These cats are extra wild business nowadays and everybody knows it BUT every now and then something happens (Chris Brown’s anger management issues) OR someone new comes along and I feel compelled to say sumthin’ – which leads me to…

Confession, I usually (grudgingly) end up tolerating the ridiculousness that has become hip hop because as I noted on facebook the other day – a lot of this ignorant ish is catchy and damn if I don’t find myself in the car bobbing along to it and then god forbid I find myself in a club and a certain song comes on – SIGH. ANYway, when a friend directed me to the James video a few weeks ago, well slap me in my mouth and throw me out the window – hot damn that was EXTRA hood with 4 heavy slices of RATCHET thrown in for flavor! I was BLOWN AWAY by… well by all of it – the sights, the sounds. Seriously, I was WTF-ing all over the place.


AND YET, I was going to just keep it moving because as Sweet Brown will tell you – AIN’T NOBODY GOT TIME FOR THAT! But then I got wind of information that I found absolutely hilarious – many of my friends who apparently don’t keep up with the foolery that is today’s hip hop thought that Mr. James with his red pants and his leopard shirt and his boys in the hood riding in shopping carts while twirling gold chains, wielding bats and flashing stacks of cash was a spoof. HA!!! God I wish, I soooooooooooo wish that had been the case.

In any event, I had to ask a few of them what was it exactly that made them think that the images and sounds Mr. James put forward were anything but wholly authentic. Was it because he looks so absolutely crazy? Was it because the video is SO EXTRA D*MN RATCHETRY? Was it because the lyrics are so thoroughly ri-damn-dic-u-lous??

“Yes” was the reply I received. So then I had to ask whether or not said friends had seen/heard the foolishness that is “Birthday Song” (2 Chainz) or “Bandz A Make Her Dance” (Juicy J)?? Turns out the answer to that was no. “Ahhhhhhh” I said, “Well that explains it.” See, if you have managed to tune out most of the utter insanity that is today’s hip hop (lucky you) then I can totally see how upon your initial viewing of “All Gold Everything” you would automatically assume it is a joke because you are without context (and because it should be) so I totally totally get it.

At this point I’m actually amused by all of it – the initial reactions of my friends, the lyrics, the outfit and definitely Mr. James himself. Don’t get me wrong I still find his representation of black people absolutely abhorrent but I also know that Barack and Michelle are still in the White House and we will always have Oprah somewhere on TV and you know Denzel is around and well you get it. Thankfully at this point we have a few national figures to umm “balance” out the various images ’cause some of that mess is just straight up tragic!

(1) His real name is Nicholas Williams and yes he is originally from Trinidad. The rest of the info contained in his Wikipedia entry is pure comedy:

“After High school, James attended Hillsborough County Community College and majored in Narcotic Salesmanship. He then settled in Down Town Tampa to pursue his dream of becoming a street corner rock slinger. He was a well known Narcotic Salesman until his business was shut down by the Tampa Police Department (TPD). James spent 7 years in the state penitentiary. When he was released from prison, he vowed to himself that he would become a Rap Artist. He then settled in Georgia, the state of Trap Music.” (Wiki)

(3) He has not released a studio album yet but he was recently signed to Def Jam primarily on the strength of “All Gold Everything” and I would assume the rest of the “songs” that are contained on his debut mixtape “Don’t Be S.A.F.E.” 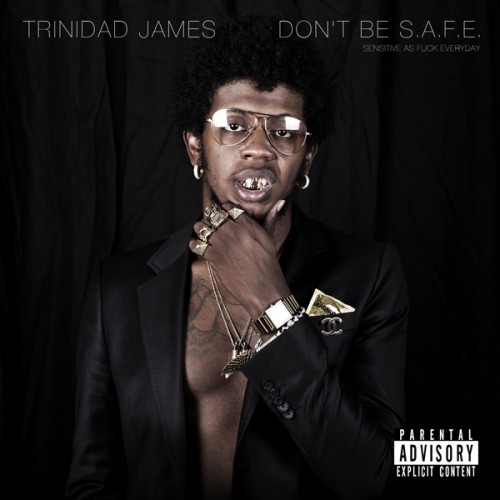 The titles of the tracks on the album are as follows:

Okay, now I’m laughing for real. WHEW! No way in hell I’m listening to any more of that nonsense but I will admit I’m curious about “Sneaky vs. Selfish” – really?


Y’all know the resemblance is DEAD ON!

Yes, a rumor has been floating around that the creators of Martin are suing Mr. James on the basis of intellectual property infringement. Hiiiiiii-larious. And yet to date no one has actually confirmed this tale so it very well may just be internet lore – still it IS funny.

(5) There are actual spoofs of “All Gold Everything” – this one is my favorite: “No Gold Anything”


Yep that is TOTALLY the dude from New Girl! Hahahahahahaha.

And that my good people is your dossier on Trindad James. Now if you’ll excuse me I think I’m going to go read a  dictionary to get my mind back together.

*Speaking of vocabulary – I didn’t do a best new words of 2012 but had I compiled such a list “ratchet” and all its iterations (ratchetry, ratchedness, etc) would have definitely been in the top five. Brilliant.

'When a hip hop song is so outrageous you automatically assume its a spoof: The Trinidad James Edition #AllGoldEverything' has 1 comment