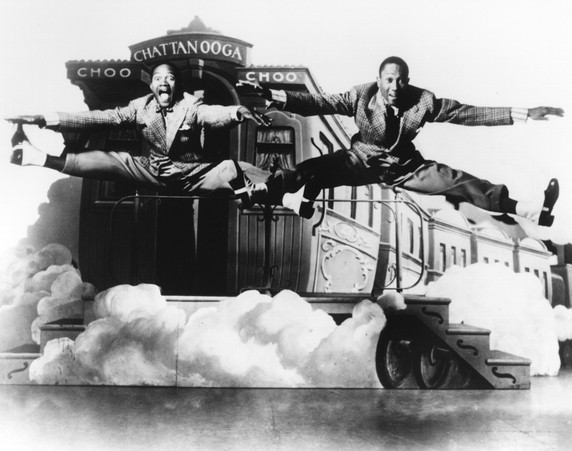 They had NO formal training! Bananas!!!

“The Nicholas Brothers were a famous African American team of dancing brothers, Fayard (1914–2006) and Harold (1921–2000). With their highly acrobatic technique (“flash dancing”), high level of artistry and daring innovations, they were considered by many the greatest tap dancers of their day. Growing up surrounded by Vaudeville acts as children, they became stars of the jazz circuit during the heyday of the Harlem Renaissance and went on to have successful careers performing on stage, film, and television well into the 1990s.” (Wiki)


And now in color…
For those of us from a certain generation AND who are fans of a particular movie, you may recognize Harold Nicholas as “Sarge” from The Five Heartbeats. #TrueTrue

“The Berry Brothers were an African-American “exotic, acrobatic soft shoe dance” trio, active in the entertainment business for over 30 years. The trio was composed of Ananias (Nyas, “King of the Strut”), James and Warren Berry.

“Bill Bailey (December 8, 1912 – December 12, 1978) was an African-American tap dancer. He was the brother of Pearl Bailey. Bill was the first person to be recorded doing the Moonwalk, although he referred to it as the “Backslide”, in the film Cabin In the Sky (1943), starring Ethel Waters, Eddie “Rochester” Anderson and Lena Horne. He was trained briefly by Bill “Bojangles” Robinson.” (Wiki)

The “moonwalk” or “backslide” as he called it happens at the 2:03 mark, of course it is his exit…

And y’all thought Michael Jackson was the first, honey chile we been creative since waaaaaay back in the day 🙂

And I’m absolutely certain that if we had footage from “The Motherland” we would really see some “original” moves. #FoShizzle

And last but not least…


I have NO IDEA what this is but she is killing it so I’m content to just watch and respect the skill – wooooow!