Patrick Radden Keefe published a very well researched article about a Mexican drug cartel known as “The Sinaloa Cartel” in the NYTimes Magazine a few days ago entitled “Cocaine Incorporated” – it was quite informative. 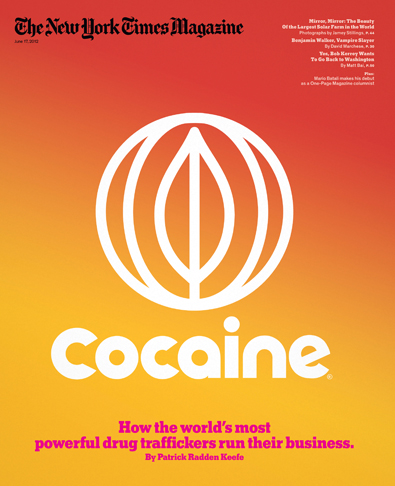 As I’ve gotten older I’ve always chuckled a little at the “War on Drugs” primarily because given what I understand about human beings, addiction, escapism and the very hard truths of supply and demand, it is a war that will never be won.

Prohibition gave rise to the prevalence of organized crime. Yes, certain organizations and certain illegal endeavors existed prior to Prohibition however one key result of banning a substance numerous people still wanted was the creation of a new and highly lucrative market tailor-made for “organizations” already accustomed to engaging in illegal activities. Seriously what did they have to lose by getting in the drug game? Absolutely nothing and everything to gain.

Similarly, the ban on the using or selling of illegal drugs gave rise to the highly lucrative illegal drug business and it is showing ZERO signs of slowing down.

Let’s briefly examine the kind of profits a powerful drug trafficker can make:

Keefe illustrates that the Sinaloa cartel can buy a kilo of cocaine in Colombia or Peru for approximately $2,000. In Mexico that kilo can be worth as much as $10,000. In the United States, that kilo could be sold wholesale for $30,000. “Break it down into grams to distribute retail, and that same kilo sells for upward of $100,000 — more than its weight in gold.” Spend $2,000 and potentially make $100,000 in profit?!? Maaaannnnn.

And as Keefe points out “that’s just cocaine. Sinaloa is both diversified and vertically integrated, producing and exporting marijuana, heroin and methamphetamine as well.”

Well of course you diversity, duh.

The focus of the article is on the “C.E.O.” of the Sinaloa cartel, a smart and very capable businessman running named Joaquín Guzmán, a.k.a. “El Chapo”.

And again to illustrate that the drug business has shown no signs of slowing down. “… according to the DEA, Chapo sells more drugs today than Escobar did at the height of his career.” Great.

The article is extremely thorough and explores how complex the drug business is in every aspect – from the internal working structure of a cartel to the innovative methods of getting drugs into the United States. He also spends some time exploring how corruption, i.e, bribes and double agents, are additional key components of this lucrative market.

Quite honestly it would seem as though legalizing drugs would be the supreme gangsta move of all time. Unfortunately at this rate there is a such a lucrative market both financially and politically from fighting the war on the drugs that I think we are still a long way off from that occurring. Although the recent strides with legalizing marijuana are promising.

In any event, the article is an excellent read, if you have time you should check it out. Warning, it is long.

Citizens United, Sheldon Adelson and the Conservative Majority in the Supreme Court

'The Drug Business' has no comments