Here’s a link to the initial article: “Why I’m Moving Out of Shondaland”

Here’s me rearranging furniture in the bigger room that has been recently vacated:

I had a few choice “initial” responses to this but they were rude and I’m kinda sorta trying to do better. I’m only responding to this because more than a few of y’all asked me about it yesterday. One of my less rude brief initial responses was “chile please” but I have a few more points to address this morning so here we go:

(1)  I don’t care if this woman moves out of Shondaland, more room for me and my sisters, my only partial concern is the reasons she cites.

(2) The alleged 500k payment to Darren Wilson from ABC News. This is false. I spent maybe 8 minutes searching the initial claim – GotNews.com and then AlterNet.org which come now, THESE sites seem reliable??? The GotNews four sentence article doesn’t even reference a creditable source or link to anything. Snopes.com posted a series of tweets from CNN’s Brian Stelter who communicated directly w/ ABC News who unequivocally stated Darren Wilson was not paid for his interview. The Root ALSO published a quote from Julie Townsend, a spokeswoman for ABC News, saying the same damn thing. Now does that mean I wanted to see Darren Wilson on ABC? No. But I also did not want to see him ANYWHERE so what I did was NOT watch his interview. Easy solution if you ask me. 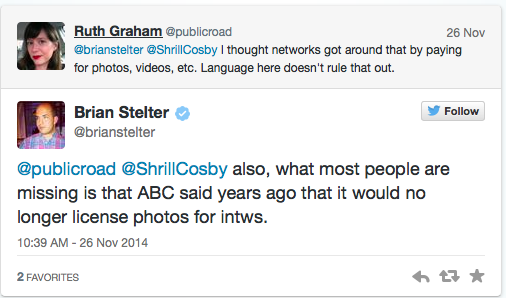 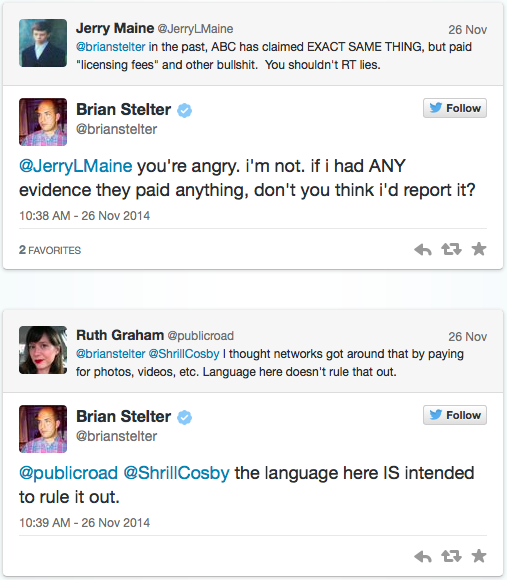 (3) The parent company to ABC is Disney. Disney/ABC have a 50% stake in A&E and 80% control of ESPN. Specifically re ABC TV, it has 89 regular weekly hours of network programming (Daytime, Entertainment & News). George Stephanopoulos does news, Shonda Rhimes does entertainment. Perhaps it would be better to boycott all TV ’cause I’m not sure how one escapes seeing people on TV they don’t like even if you’re only watching youtube.

(4) Entertainment – that is what ALL of her shows are. Period. If you do not like her brand of entertainment that is fine you are not obligated to watch it. If you think it’s campy, if you think it lags, whatever your “critical” reasons are fine, don’t watch it. Please note Liv & Fitz DID specifically discuss their interracial couplings in a previous season however they did not DWELL on it and that’s key about this show in particular – we are not constantly dwelling on race here. (And yet, if you are paying attention, Papa Pope is ROUTINELY referencing race when he gets his speech-making on.) In any event in Shondaland we see strong, beautiful, flawed, layered women. They are not one simple stereotype and that IS progress.

(5) But let’s discuss race for one second. Yes Liv & Annalise are with, have been with, may continue to be with white men. Your point? In the real world, Black women do date outside the race although my impression is that it’s not quite as much as black men. Why do we have to be shamed and dissected for it and black men just get a shrug? Miss me w/ that hypocrisy. Trust that dating outside the race does not equate to abandoning the race. Many of us are able to multi-task a bit better than that.

(6) Moving to skin color & hair – early in the piece this line was written “Of course, she didn’t look like us, with her airbrushed skin and bone-straight perm.” Excuse me? You mean she doesn’t look like you? Then again most of us don’t look like people who are paid to look beautiful for a living. That’s called money not self-hatred. Also is there a problem w/ rocking a “bone-straight perm”? I and every woman with any sense should wear her hair EXACTLY as she sees fit and damn what anyone else thinks about it.

(7) I don’t internalize the situations I see play out on TV because IT’S TV! I laugh, I gasp, I may tear up, I covet clothing and then I move on. Shonda’s characters don’t make me feel bad about myself, quite the contrary. They amuse me or annoy me or aggravate me but again that’s because they are multi-dimensional “characters”.

Pause – I can’t front the fact that I have even given this much energy to this is aggravating me so I’m wrapping this up.

(8) I cannot co-sign this “either”/”or” diatribe. I can march in the street and later take a few hours out of my probably incredibly stressful day to watch some very interesting black women on primetime tv. They are not whores, they are not on drugs, they are not on welfare, nor are they untouchable queens placed on a pedestal. They have powerful positions, wear fly a*s clothes and are usually the smartest people in the room – except when it comes to relationships and that is probably the realest ish about all of her shows.

(9) Shonda has an eight figure deal. She good.

'Some woman said she was moving out of “Shondaland” because of stuff and a bunch of y’all wanted to know what I thought. Well…' has no comments