Citizens United is the Supreme Court case that allowed for corporations and individuals to donate unlimited amounts of money to an election. 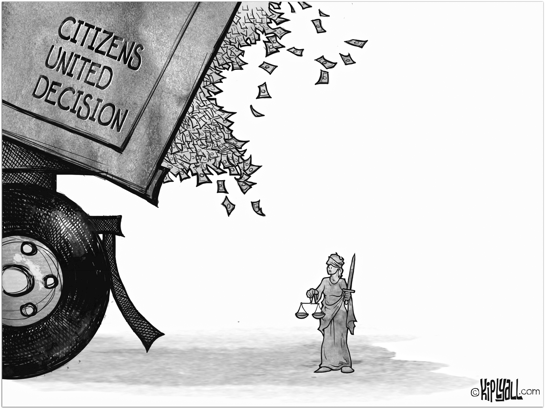 In the Citizens United case, Justice Anthony M. Kennedy, writing for the five justices in the majority, wrote that the First Amendment prohibits limits on independent political spending by corporations and unions. Justice Kennedy reasoned that such expenditures “do not give rise to corruption or the appearance of corruption.” (NYT)

I’ve typically tried to maintain some degree of reverence for all the members of the Supreme Court but Justice Kennedy’s belief that unlimited amounts of money will not result in corruption of the political process is complete bullsh*t and he is either intellectually stymied, insane or in cahoots with the GOP. Unfortunately for him neither of those designations are a good look. Quite honestly I strongly question the motives of all 5 justices who formed the majority in this ruling.

Supreme Court justices are appointed for life and thus supposed to be above the political fray. They are supposed to be learned intellectually superior experts of the law and thus capable of being entrusted with making decisions that can drastically affect people’s lives. Unfortunately it is more often the case that they rule in lock step with their political leanings (hence conservative vs. liberal appointees) and depending upon which group is in the majority American lives can be completely upended with disastrous results.

(1) The Dred Scott decision upheld the Fugitive Slave Act (1857) which meant even if a slave managed to escape and make it to a free state his owner could have him seized and thrown back into slavery. Further, this atrocity could occur even if a slave had escaped years prior. Thanks Supreme Court, guess we’ll just go ahead with that Civil War we’ve been trying to avoid.

(2) Plessy v. Ferguson (1896) – this is the horrific decision that ruled that “separate but equal” was constitutional and gave legal sanction to treating blacks as second class citizens for another 58 years. It wasn’t until 1954 with the ruling in Brown v. Board of Education that “separate but equal” was declared unconstitutional thus making segregation illegal. Now THAT Supreme Court was an exemplary court. Sigh.

(3) Bush v. Gore (2000) – who can forget the nightmare decision that gave us a President George W. Bush which resulted in two wars and a failed economy? Right.

See when they get it wrong boy oh boy do people suffer. Clearly not ALL people suffer but if you happen to be a minority and/or financially challenged then chances are you (or your ancestors) suffered. Speaking of suffering…

(4) And now the decision in Citizens United has led to people like Sheldon Adelson publicly attempting to buy Mitt Romney a presidential election. 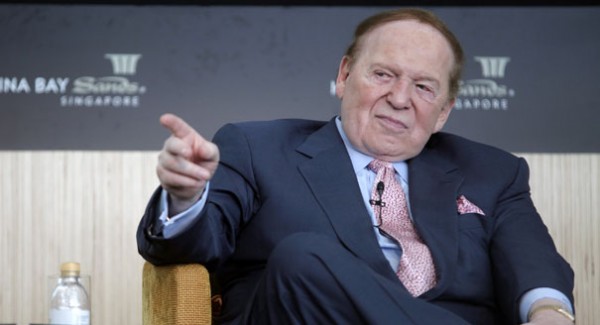 That’s $60 million we know of (other huge donations may be secret), and it may be only a down payment. Mr. Adelson has made it clear he will fully exploit the anything-goes world created by the federal courts to donate a “limitless” portion of his $25 billion fortune to defeat the president and as many Democrats as he can take down. (NYT)

I’ve mentioned Adelson’s agenda before but it is certainly worth mentioning again. His agenda is primarily twofold:  (1) Israel and (2) being able to continue to shelter money overseas.

(1) Specifically regarding Israel, he abhors the idea of a “two-state solution” to the Israeli-Palestinian conflict which is “supported by President Obama and most Israelis. He considers a Palestinian state ‘a stepping-stone for the destruction of Israel and the Jewish people,’ and has called the Palestinian prime minister a terrorist.” (NYT)

Romney is being his usual “say something but really say nothing” self on the matter and says that he believes that Israel does want a two-state solution (duh apparently they said so) but that the Palestinians really do not support that solution and simply want to eliminate Israel. Ooooookaaaay and your proposed solution is….??????? Right. Whatever Adelson tells you it is.

(2) With regard to Adelson protecting his money:

Mr. Adelson’s other overriding interest is his own wallet. He rails against the president’s “socialist-style economy” and redistribution of wealth, but what he really fears is Mr. Obama’s proposal to raise taxes on companies like his that make a huge amount of money overseas. Ninety percent of the earnings of his company, the Las Vegas Sands Corporation, come from hotel and casino properties in Singapore and Macau. (The latter is located, by the way, in China, a socialist country the last time we checked.)

Because of the lower tax rate in those countries (currently zero in Macau), the company now has a United States corporate tax rate of 9.8 percent, compared with the statutory rate of 35 percent. President Obama has repeatedly proposed ending the deductions and credits that allow corporations like Las Vegas Sands to shelter billions in income overseas, but has been blocked by Republicans. (NYT)

Excellent. If I wasn’t so appalled by his tactics I would almost find him amusing. I understand that insanely wealthy people (who didn’t inherit their initial wealth) did not become wealthy by being stupid however I’m always struck by the fact that no matter who is in office and no matter how far up or down the tax rate goes, THEY WILL STILL HAVE THEIR BILLIONS! Geez, can you let someone else breath for a year or two?? Stingy, selfish, power hungry bastards. Damn shame really. 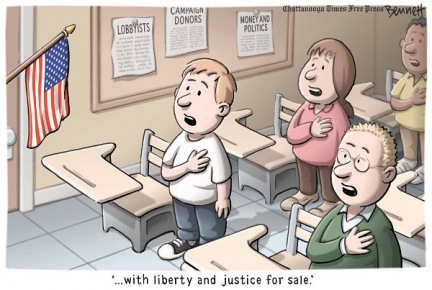 Look I get that a few you may no longer be enamored with President Obama but the alternative is far worse. Recovery takes time and it takes elected officials willing to work together and compromise for the greater good of the American people. Time and time again the GOP has shown their extreme unwillingness to do what is best for the country. Don’t allow them the opportunity to keep c*ckblocking the process. #Democrats2012

'Citizens United, Sheldon Adelson and the Conservative Majority in the Supreme Court' has no comments