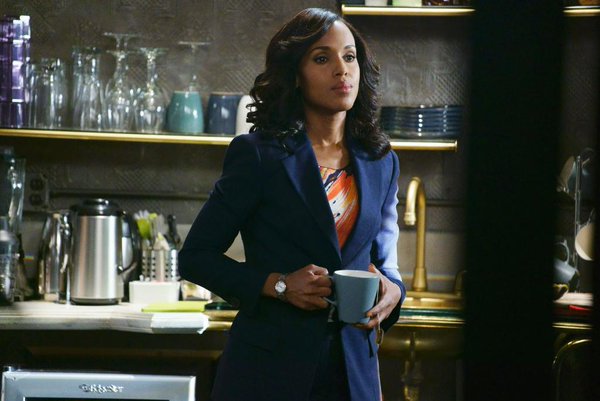 (1) It’s debate night. I thought I would enjoy this more but Doyle is doing such an excellent job of impersonating Trump that it was actually uncomfortable to watch. Mellie came at him about his playboy billionaire greedy capitalist lifestyle and he hit back with ‘well WTH is going on with you having your ex-husband’s ex-mistress as your campaign manager??’ I mean I imagine it IS weird to outsiders. I go way back with this crew so #KanyeShrug. Susan is floundering or as Fitz put it “stroking out” cause she is still in her feelings about David’s trifling a*s. Get it together girl!!!

(2) After a quick break Mellie scored a point with making it clear that Fitz is indeed her EX-husband and women are not their husbands’ keepers. And thanks to a chat with Fitz Susan found her voice. She used that husbands’ keepers reference to share a story about her husband serving in the Army. It was moving. Ended it with “no we are not our husbands’ keepers but maybe we should be America’s.” She won. 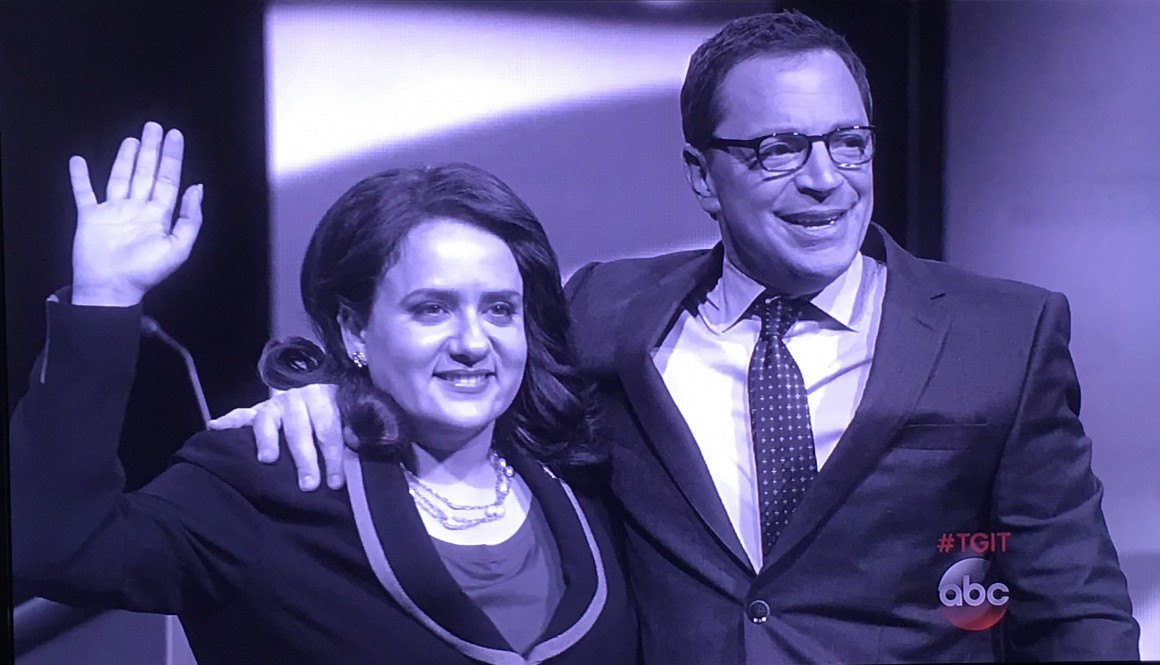 (3) Mellie ends up in Liv’s office feeling dejected and unloved: “People hate me.” Me: I like you Mellie!! Oh sh*t. Liv is making BIG promises. “Mellie I will get you in the Oval, come Hell or high water.” #OliviaPopePepTalk

(4) Liv drops the intel on Susan Ross to her staff. She’s a liar. That dead man ain’t her husband. #PlotThickens

(5) Susan ain’t happy the headline stories about her win are using the picture of her and David. “‘I’ won the debate damnit!” I hear you girl. Ain’t that some sh*t?? Liz made a little dig about it being a bigger deal that she “won David” but of course Susan didn’t catch it. If the person you are shading isn’t privy to the information for which they are being shaded, is it shade?? #Hmmmm

(6) LOVE Liv’s suit!! (See featured image) Marcus has been tasked with accompanying Mellie to LA for her appearance on Jimmy Kimmel. He doesn’t want to do it because well he hates her. She was right about that. Anyway the two funny exchanges in this scene were (a) Huck said he couldn’t go because he’s “too dangerous.” HILARIOUS cause true. And (b) when Liv forcibly told Marcus she needed him to do his job his response was “whatever” and Liv’s facial reaction – like I legit wanna cuss you right now but I’m not gonna.

(7) OPA confirms that Susan was never married to the dude she said was her husband AND he’s NOT her child’s father. Real daytime soap opera situation. Liv hollas at Alex again to get the info re Susan’s real baby daddy (for the record I hate that term but they used it so “whatever”). In exchange she gives him a name to confirm Edison’s stint in rehab for pill popping pain killers. 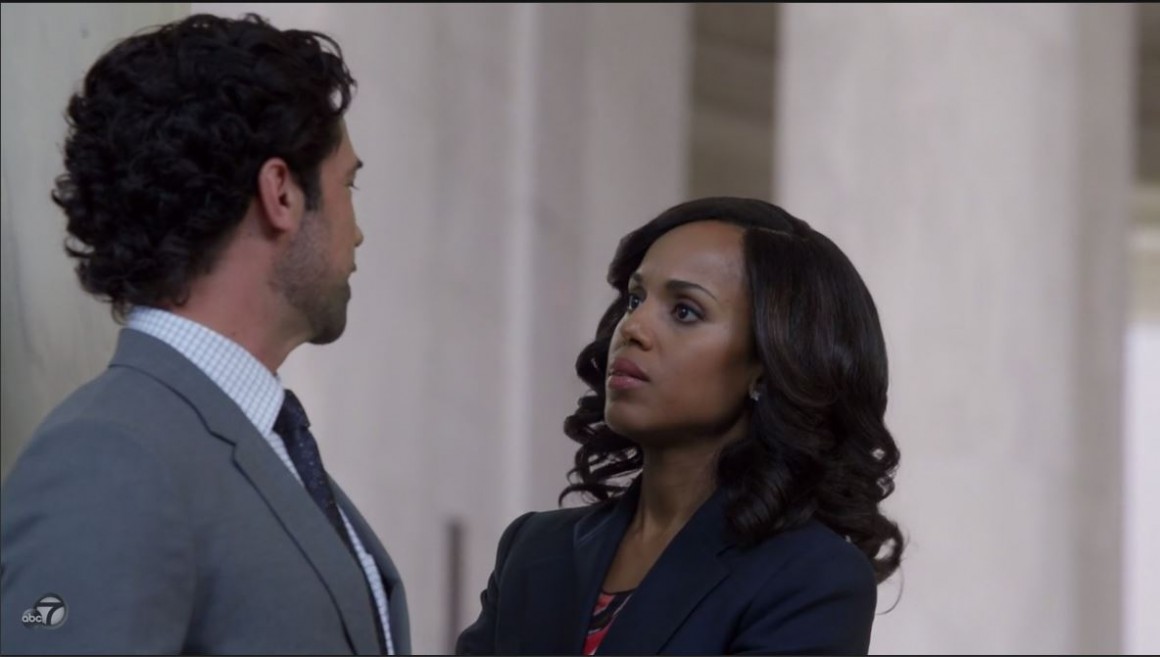 (9) Alex takes Edison’s drug addiction and depression intel to his brother and Cyrus. Cy is like welllll it’s no longer crazy to be crazy sooo “ehhh” re this news. Gov Frankie is also not feeling using this info. Cyrus warns Alex that he might be dancing on a thin rope with this scheme. Y’all know how Cyrus do when he sees an opening #Exploit!!

(10) Mellie is supposed to go on Kimmel and do a “Mean Tweets” segment. Of course Mels has no idea WTF that means and once she finds out she is less than enthused. Marcus’ response? He tells the producer to find meaner tweets. LOL!! This actually might be entertaining!

(11) Liv goes to prison to holla at Susan’s ex-lover. Liv tells him she can get him out of jail IF he’s down to drop some DNA and publicly acknowledge Susan’s kid as his. His response is hella lukewarm, says he needs to think about it. Huck is NOT down with the program. He read Ronnie’s file and notes ole boy is not a snitch PLUS he’s concerned about how this will affect Casey (Susan’s daughter). Glad Huck has HIS moral fiber intact – well y’all know what I mean. Obviously he’ll still kill someone if he needs to but like a bad person not just a random person. I’m digressing…

(12) David comes to Susan’s office to chat. Susan is basically like “fck you.” But y’all know how guys are once they’ve made up their minds about being in love with you. “I know I messed up and I’ll do/say anything you want me to say to the world to prove to you that I loves you and only you boo!” Susan just looks at him. 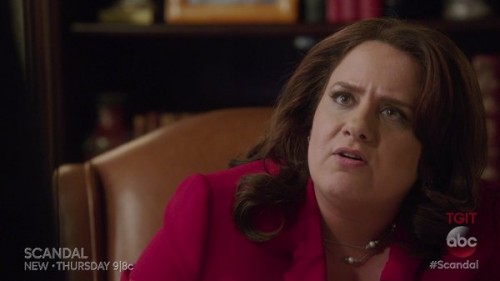 (13) The info about Edison comes out. Gov Frankie and Alex are having a seemingly tense convo in Spanish. Cy is eavesdropping and goes to stoke the flames of possible discord. Once again the Gov reminds Cy that Alex is his brother. Period.

FIRST, Edison is talking STRONG about how this is Liv’s fault and Papa Pope needs to “reign” her in AND THEN this not knowing mofo gon’ say “Did you hear me?” Oh. No. He. Didn’t. To Papa Pope y’all! He said “Did you hear me?” TO PAPA POPE!! I literally gasped out loud. Lawd what is about to happen?? The real comedy is Jake’s a*s just sitting there eating chicken watching this go down like “un oh you don’ done it now.” I am in TEARS!!!

THEN after dis fool Edison has said his piece, Papa Pope looks over at Jake like “Did you hear that sh*t?” Now Jake is looking amused and yes he is STILL smashing his chicken. But really what PP said was: “I can’t quite decide which part of your indecorous behavior troubles me more,” (pause – he used the word “indecorous” y’all, YES WITH THE VOCAB PAPA POPE! YES!!) Continuing “the decision to interrupt me while I was speaking, the distasteful reference to my daughter requiring reins, or this foolish belief that I would ever take orders from you!” And then it got better. Papa Pope went FULL Papa Pope on him:

PP: “So you don’t want to be president?”

PP: “Then you want to be a boss! Which is it, yes or no?! Should you ever be so unwise as to forget who the real boss, the only boss, is around here again, Meridian Terrance? HA! That will be the last of your worries. I can guarantee that. I’ll handle this my way. Until then, I suggest that you keep out of my sight and keep my daughter’s name out of your mouth.” TELL HIM PAPA POPE! TELL. HIM!! RIPPED HIM A NEW ONE YES HE DID!!

Papa Pope leaves the room then Jake pipes up talking about “if you’re hungry, there’s more chicken in the fridge.” I AM ON THE FLOOR! DEAD DEAD DEAD! LOVED THAT SCENE!

(15) Oh hell. The nurse from the rehab facility is doing a press conference saying that ish about Edison Davis ain’t true. A reporter asked the nurse if she thought Gov Frankie was lying. Was it determined that Frankie’s camp linked the info??? If not then why ask that question?? Let me stop, I’m going too deep. Anyway, now the Gov looks REALLY bad. Alex is looking shook and Cyrus does that “I told you so” head shake.

(16) Alex goes to yell at Liv. Liv has been yelled at by waaaaay better than you bruh (#PapaPope). And of course she ain’t concerned. Liv is like you didn’t move quick enough – oh well that’s on you playa. Alex is still fuming and says he can’t wait to go toe to toe with Liv in November IF Mellie gets the nomination. Umm Alex I don’t think you really want that…

(17) Mellie is still b*tchin and Marcus finally tells her about herself. Super annoying and whiny! Tells her she is “officially the worst.” Yeah, I laughed.

(18) I’m not feeling this shirt Liv is rocking (too loose) AND she’s lost her mind again but in a different direction. Heffa don’ gwan to the dark side. Ronnie still ain’t about that snitch life tho so Liv threatens him. Yep, she threatened to blackmail his a*s. Quinn’s initial look is like “wait, what da fck are you saying Liv?” Then she gets it together and backs Liv up. Damn girl, you’re about to lose your squad traveling down this road. Not cool Liv, not cool. 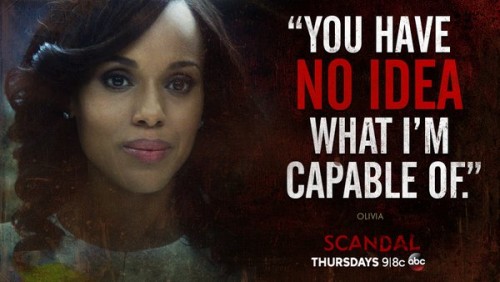 (b) So peep game, Quinn runs off to tell Abby that Liv has for real lost her way, says she is replacing the white hat with a black skullcap – okay I can see going to Abby for advice BUT then Quinn hands Abby the file??? What da hell? Not doing Liv’s shady bidding is one thing but handing over the “get Susan Ross” file to Abby is grounds for firing AND an a*s whooping. I’m just saying…

(c) So the result is Liv returns to her office and fcking Fitz is there (as are Quinn, Abby and Fitz’s goons, I mean secret service). He lectures her on decency says he wants to “keep it real” with her. Liv’s response: “Whoever taught you that phrase should be fired immediately.” First, LOL and second, I concur. Their exchange gets heated (of course). He is still smarting about Defiance – sigh. Get over it already Fitz damn! Anyway, Fitz tells her they don’t have to be bad people anymore. Liv just looks at him. He leaves.

(d) Then Abby and Quinn gon’ walk dey meddling behinds to her office door like Liv really wants to talk to those two heffas right now. Liv shuts the door in their faces. #ByeHeffas! 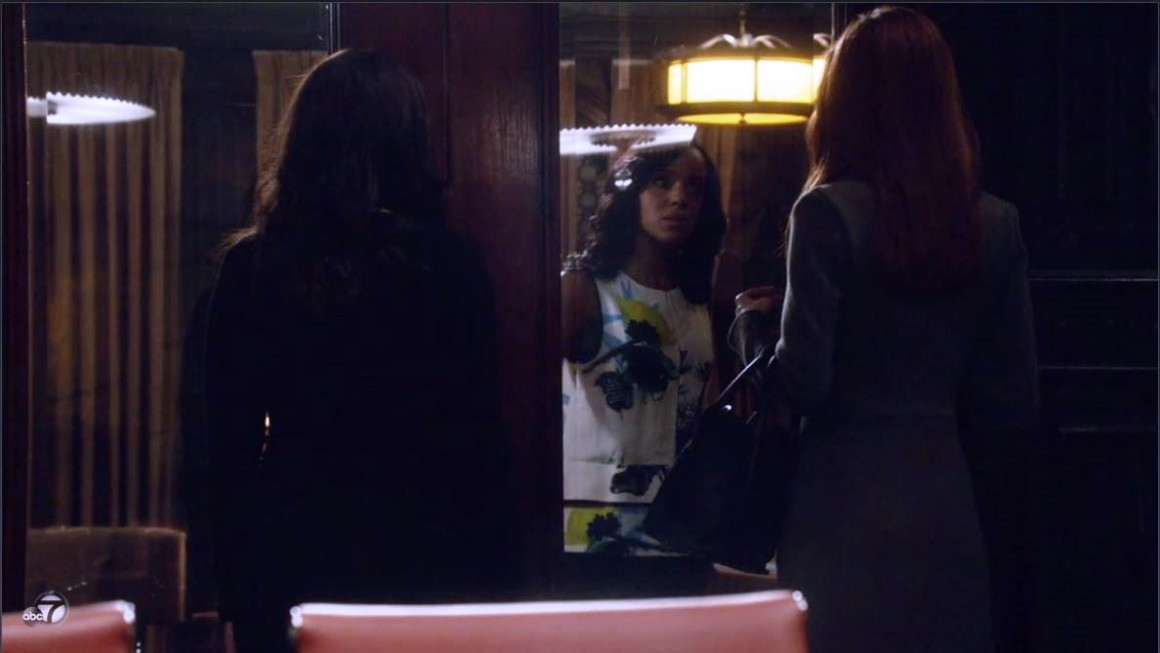 (19) Of course Susan is distraught about this Ronnie news. Super wounded, weepy and shaky voiced. Fitz gives Susan a “high-minded” speech about honor, earning the oval, blah blah blah. This fool is about to come clean to Susan about Defiance. Really Fitz? REALLY?? What is going on? Is this the last season??

(20) Marcus and Mellie make nice. He shares some “mean tweets” he received when he was running for Mayor. Discloses that he has a “high booty” – wellll allllriiiiiiight Mr. Marcus. Ahem… Btw, Mellie repeating the words “high booty” – comedy. Also just as a FYI, I don’t need Mellie and Marcus hooking up. I just don’t need it. Not ever.

(21) Susan makes a decision about how to handle the baby daddy bomb and decisively gets up from her desk to go and to tell Fitz. Unfortunately the situation has changed. Ronnie’s dead. He hung himself. Liv at least had the decency to look shook. Yeah girl, his death is your fault. Damn shame.

(22) Gov Frankie demotes his lil bro – exactly as Cyrus intended because of course that’s who paid off that nurse at Meridian Terrace. Well apparently Tom did the actual dirty work but it was Cyrus’ plan. These two… #NoGood 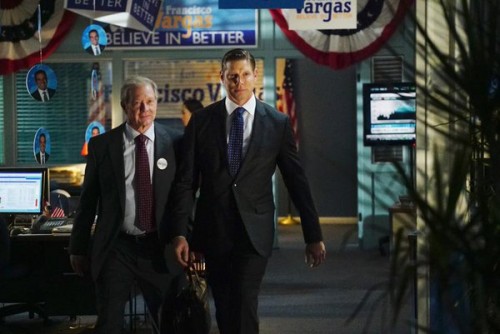 (23) Susan and David are doing a round of interviews. He thinks he’s back in her good graces. HA! Nah playa. Susan to David: “You’re a prop. That’s all.” #KnowYourPlaceHomie 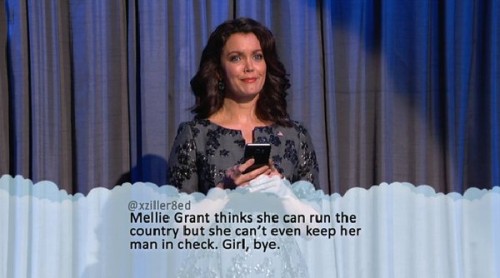 (25) So Ronnie’s death was the wake up call Liv needed to take off that black skullcap. She summons Fitz back to her office and she’s like game on and I’m gonna win but a “clean” win, with “dignity” and “pride” yada yada. Fitz is down for a “fair” fight and they drink bourbon together. Well that wrapped up (quickly) nicely didn’t it?

Coming Up: I have no idea