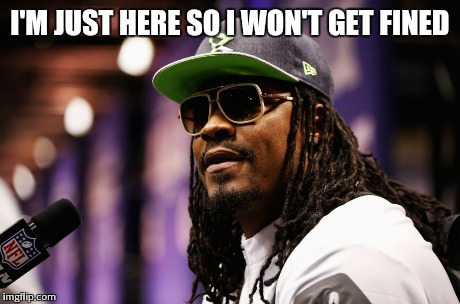 I’m going to try and keep this short. I love Marshawn Lynch. Period.

Okay I thought about ending it there but I’ll continue for a few more lines. Yes, I am aware of the NFL’s media policy:

“The NFL Media Policy mandates that players must be available to the media during the practice week at the team facility and in the locker room following all games. Star players, or other players with unusually heavy media demands, must be available to the media that regularly cover their teams at least once during the practice week in addition to their required postgame media availability.” (CBS Sports)

AND still, I am #TeamLynch (an unfortunate last name if you are steeped in American history but I digress). I got wind of him last year after I started paying attention to Richard Sherman (another Seahawks player I adore!) and was intrigued by his refusal to speak to the media.

Who is this man who told the machine “nah I’m good”?? Who is this man who said “I say what I need to say on the field”? This is me paraphrasing by the way but knowing what we know about Mr. Lynch he totally could have made both statements.

But seriously, I was genuinely curious about him, his background and his stance on the media. In this era where EVERYONE maintains a social media presence, where people deliberately seek out media attention, where your job has made it a requirement that you make yourself available to the media – who was this person who said “no”? And why?

Short answer to who he is:

He was one of four children growing up in an Oakland neighborhood full of drugs, prostitution, and shootings. His father was around the neighborhood, and Lynch would see him sporadically, but his dad refused to raise him. He made it out anyway, turned into a local legend, and earned a scholarship to Cal, where he had a 3.2 GPA before he went pro and became a millionaire. (Grantland)

He’s had a few troubles. He also regularly and happily gives back to his community.


Regarding the “why” part. What’s funny is that I kinda almost didn’t (and still don’t) care. I appreciate him taking a stand. I appreciate him exerting control over his person. He executes flawlessly while at work. When work is over, he’s not interested in talking about it with people he doesn’t know very well. Donovan McNabb pointed out that quarterbacks, as leaders of the team, do have an obligation to the speak to the media and Russell Wilson does just that. I would also add that it’s not as though Seattle is lacking in mouth pieces (Richard Sherman…) so why the backlash?

Oh wait, he should be grateful for the opportunity? How dare this well paid athlete not jump when told to do so?? Fuck that and fuck this guy:

This reporter’s assessment that Lynch’s refusal to “chit chat” with the media is a result of limited intelligence is (a) racist and more important (b) indicative of his own ill functioning brain cells.

An excerpt from NFL.com’s Michael Silver 2014 EXTENSIVE INTERVIEW with Lynch:

“I’ve never seen anybody win the game in the media. But at the same time, I understand what it could do for you, if you wanted to be someone who talks a lot. But that’s not me.

“And I’m not as comfortable, especially at the position I play, making it about me. As a running back, it takes five offensive linemen, a tight end, a fullback and possibly two wide receivers, in order to make my job successful. But when I do interviews, most of the time it’ll come back to me. There are only so many times I can say, ‘I owe it to my offensive linemen,’ or, ‘The credit should go to my teammates,’ before it becomes run down.

“This goes back even to Pop Warner. You’d have a good game and they’d want you to give a couple of quotes for the newspaper, and I would let my other teammates be the ones to talk. That’s how it was in high school, too. At Cal, I’d have my cousin, Robert Jordan, and Justin Forsett do it.

“Football’s just always been hella fun to me, not expressing myself in the media. I don’t do it to get attention; I just do it ’cause I love that (expletive).” (Deadspin)

Makes sense to me. Also, clearly he will speak to a reporter. I guess some of them are feeling some kinda way because they are not in that chosen circle. Seems kinda high schoolish to me. Y’all mad?? Why don’t you respect the man’s wishes and leave him alone? If not, I imagine you can expect more of this in the future:

“Lynch stayed at his designated podium for 4 minutes, 51 seconds — over an hour less than all his teammates and coaches — and was asked 29 questions. At the 4:51 mark, he said “time,” stood up and walked away from the microphone.” (ESPN)

I said I was going to try and keep this short didn’t I? Oh well… And of course one more thing to leave you with:

Let’s do a quick recap of Monday’s News…

'Marshawn “You Know Why I’m Here” Lynch' has no comments