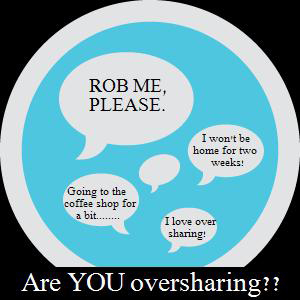 I have two posts in the wings – one re Red Tails (yep, I’m still on that) and one re Leroy Gingrich (I’m not getting off that one until he goes home). Unfortunately a very hectic weekend and this “in the way but oh so necessary” day gig forced me to delay publishing those – meaning I’m not done writing them. So I decided to hit you with some extremely helpful information re Facebook.

I’m not gonna front, I basically cut and pasted this entire article but my layout is different so there!

Second, make this fun for yourself and count how many of these things you have available on fb:

(1) Your Birth Date And Place

Beth Givens, executive director of the Privacy Rights Clearinghouse advises that revealing your exact birthday and your place of birth is like handing over your financial security to thieves. Furthermore, Carnegie Mellon researchers recently discovered that they could reconstruct social security numbers using an individual’s birthday and place of birth. Rather than remove your birthday entirely, you could enter a date that’s just a few days off from your real birthday.

“Your mother’s maiden name is an especially valuable bit of information, not least since it’s often the answer to security questions on many sites,” writes the New York Times. Credit card companies, your wireless service provider, and numerous other firms frequently rely on this tidbit to protect your personal information.

Publicizing your home address enables everyone and anyone with whom you’ve shared that information to see where you live. Opening up in this way could have negative repercussions:  for example, there have been instances in which burglars have used Facebook to target users who said they were not at home.

(4) Your Long Trips Away From Home

When you broadcast your vacation dates, you might be telling untrustworthy Facebook “friends” that your house is empty and unwatched. “[R]emind ‘friends’ that you have an alarm or a guard dog,” Lieber writes.

(5) Your Short Trips Away From Home

Although new features like Facebook Places encourage you to check in during outings and broadcast your location (be it at a restaurant, park, or store), you might think twice even before sharing information about shorter departures from your home. “Don’t post messages such as ‘out for a run’ or ‘at the mall shopping for my sweetie,'” Identity Theft 911 cautions. “Thieves could use that information to physically break in your house.”

By now, nearly everyone knows that racy, illicit, or otherwise incriminating photos posted on Facebook can cost you a job (or worse). But even deleted photos could come back to haunt you.
Ars Technica recently discovered that Facebook’s servers can store deleted photos for an unspecified amount of time. “It’s possible,” a Facebook spokesperson told Ars Technica, “that someone who previously had access to a photo and saved the direct URL from our content delivery network partner could still access the photo.”

Flubbing on your tax returns? Can’t stand your boss? Pulled a ‘dine and dash?’ Don’t tell Facebook. The site’s privacy settings allow you to control with whom you share certain information–for example, you can create a Group that consists only of your closest friends–but, once posted, it can be hard to erase proof of your illicit or illegal activities, and difficult to keep it from spreading. There are countless examples of workers getting the axe for oversharing on Facebook, as well as many instances in which people have been arrested for information they shared on the social networking site.

Watch where you post your phone number. Include it in your profile and, depending on your privacy settings, even your most distant Facebook “friends” (think exes, elementary school contacts, friends-of-friends) might be able to access it and give you a ring. Sharing it with Facebook Pages can also get you in trouble. Developer Tom Scott created an app called Evil that displays phone numbers published anywhere on Facebook.  According to Scott, “There are uncountable numbers of groups on Facebook called ‘lost my phone!!!!! need ur numbers!!!!!’ […] Most of them are marked as ‘public’, and a lot of folks don’t understand what that means in Facebook’s context — to Facebook, ‘public’ means everyone in the world, whether they’re a Facebook member or not.”

CBSMoneyWatch.com warns social network users that counting down the days to a vacation can be as negligent as stating how many days the vacation will last. “There may be a better way to say ‘Rob me, please’ than posting something along the lines of: ‘Count-down to Maui! Two days and Ritz Carlton, here we come!’ on [a social networking site]. But it’s hard to think of one. Post the photos on Facebook when you return, if you like. But don’t invite criminals in by telling them specifically when you’ll be gone,” MoneyWatch writes.

Identity thieves also target children. “Don’t use a child’s name in photo tags or captions,” writes Consumer Reports. “If someone else does, delete it by clicking on Remove Tag. If your child isn’t on Facebook and someone includes his or her name in a caption, ask that person to remove the name.”

You take your classic Camaro out for street racing, soar above the hills in a hang glider, or smoke like a chimney? Insurers are increasingly turning to the web to figure out whether their applicants and customers are putting their lives or property at risk, according to Insure.com.

There have been additional reports that insurance companies may adjust users’ premiums based what they post to Facebook. Given that criminals are turning to high-tech tools like Google Street View and Facebook to target victims, “I wouldn’t be surprised if, as social media grow in popularity and more location-based applications come to fore, insurance providers consider these in their pricing of an individual’s risk,” says Darren Black, head of home insurance for Confused.com.

Identity Theft 911 reminds Facebook users never to post photos that reveal the layout of an apartment or home and the valuables therein.

(13) Your Profile On Public Search

Do you want your Facebook profile–even bare-bones information like your gender, name, and profile picture–appearing in a Google search? If not, you should block your profile from appearing in search engine results. Consumer Reports advises that doing so will “help prevent strangers from accessing your page.” To change this privacy setting, go to Privacy Settings under Account, then Sharing on Facebook.

Conclusion:  Maybe just delete your fb account altogether… #HA!  Seriously though, perhaps you could look at this as a gentle reminder to fall back on the OVERSHARING. Just because it’s available doesn’t mean you have to use it. #thinkaboutit