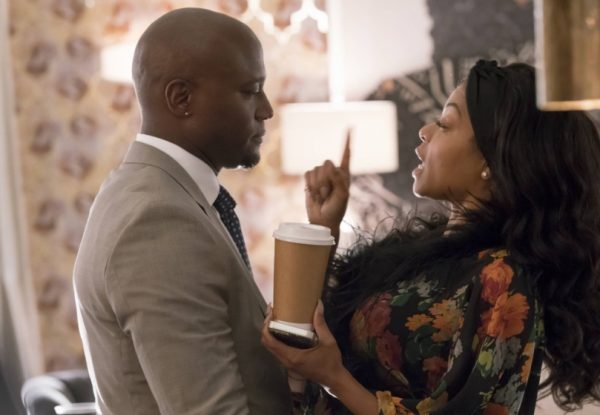 (1) Angelo shows up at Cookie’s place with a morning coffee trying to get some nooky which got shot down (he had to go anyway) but she DID email him a picture of her in her birthday suit. Who emails racy photos nowadays?? Cookie needs to explore some other options. #Technology

(2) Jamal in the booth with the angry gay producer dude tripping about a track being too busy. ‘Mal is sweaty and jumpy cause he’s trying to quit his pain meds cold turkey. That’s not gonna end well. #Foreshadowing

(4) Anika is singing to Baby Bella when ahole Lucious strolls sporting a do-rag (kill me now) clowning her singing. Like his shaky vocals do anything but evoke headaches. Hmpf. 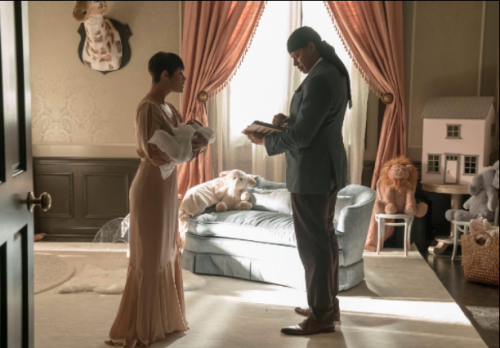 (5) Anika gets to be Shine’s head of A&R. Like who REALLY wants that job?? Lucious receives his Tiana track with a threatening message. Awww ish HACKED!

(6) So Dre brings in a cyber nerd to handle the hack issue. Two key things about this scene: (1) Thirsty is back! Where you been bruh?? And (2) Lucious is getting his damn hair conked and I want to drop kick him into the Atlantic. 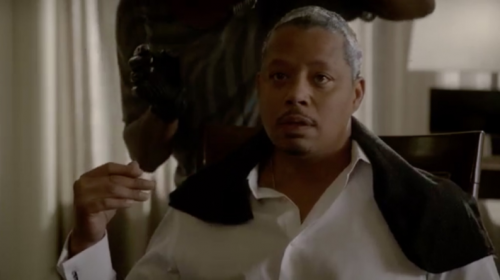 (7) Nessa and Keem in the booth working on another collabo. Keem still acting like the young spoiled mitch a*s dude he is re Nessa when Dre rolls in with a quick word for his lil bro: “You better fall back, boy.” Keem got some muscles but Dre got about what 5, 6 inches on that lil dude?? #YouDontWantItSon

(8) Dear God! French Montana’s acting is HORRIBLE!! Like for real GARBAGE!!! Sorry I got stuck. Anyway, Lucious confronts FM about the hack. FM don’t know wtf Lucious is talking about. Mind you FM sounds like Kanye on “Through the Wire.” Is his mouth wired shut just for sh*ts and giggles or is that just how he sounds?? Never mind, don’t answer that. Geezus his acting…

(9) Cyber geek dude comes in all aflutter cause now Empire’s emails have been hacked. Rut roh! Whomever is behind it is asking for money, lots of money. Le plot thickens!!

(10) We are now in the belly of Empire. Cyber dude is delivering nothing but bad news. He might not make it to the end of this episode. Lucious ain’t paying no d*mn ransom. Someone has already printed out every email that mentions Lucious by name and has the documents color coded. #TVMagic

(11) Angelo is in the middle of his running for mayor speech when Lucious calls Cookie re an emergency board meeting. Dre threw Vernon under the bus re using Empire money to hire prostitutes back in the day and Dre copped to covering it up. Two board members then proposed that Dre step down. Dre was like “hold up playas, dem dere emails hold some incriminating freaky deaky info about y’all as well so shut it” AND added that Thirsty can vouch for Edna’s specific type of freaky. Thirsty play too much for rubbing his bottom lip and then biting into that chocolate donut. TOO MUCH!

(12) Lil Romeo a.k.a. “Gram” all up on snapchat talking bout he ain’t messing with Tiana no more. She crying. Girl stop. Cookie called him a buster. Cookie imma need you to come stronger than that.

(13) Lucious interrupts Tiana’s pout fest and orders everyone into the lobby. ALL of Empire’s emails have been made available to the world. Then comes the pièce de résistance of the email dump – “Cookie’s Cookies”! Yep that photo she sent Angelo earlier is now available to the world. The reaction in the lobby, everybody gasping and her sons covering their eyes – priceless. Lucious’ reaction, throwing a chair at the screen (Q. But what about the other screens? If you take out one screen did the rest of them go blank as well? Was confused. Anyway…) – kinda respected it. Cookie’s reaction: “What the hell y’all looking at? They perky!” YAAAAAAAAAASSSS! 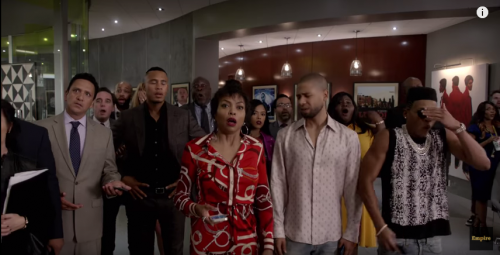 (14) Lucious called Angelo “Ray J” – that was kinda funny. Lucious mad ’cause Cookie sent that pic to Angelo. Cookie called Lucius fat. Then Anika walked in for her meeting with Shine. First thing outta Shine’s mouth “I ain’t do it.” I think it’s safe to say no one but Lucious suspected you bruh.

(15) So that shady white dude who SWEARS he’s “down” comes crying to Becky about people hating the leaked Tiana track. Initially Becky properly tells him to kick rocks and then for some inexplicable reason she decides to help him. Why come??? He has ALREADY shaded you once! Wtf girl??? She thinks she striking a bargain with him but we all know she’s about to get PLAYED. AGAIN!

(16) Jamal’s PTSD sponsor dude is in the studio looking at the hate emails Jamal received, basically checking in and making sure Jamal is okay. I like him. He seems grounded. I may have said that before but it is worth repeating. Shady gay producer dude is there as well, basically being shady gay producer dude hating on PTSD sponsor dude. Producer dude rearranged Jamal’s track and then ish got bad. Tiana’s sinister head pops up again and the tracks start getting erased, seconds later all gone. Damn.

(17) Lucious is back in the belly of Empire, this time with a bat while cyber dude is still trying to figure out wtf is happening. Goes from bad to worse. Hackers are full in the system now. They have access to EVERYTHING! Not clear if the subscriber info is still safe. This is bad y’all. Actually starting to feel a little sorry for Lucious. That’s not true, I’m feeling sorry for everyone else. Ain’t thinking ’bout that guy.

(18) Angelo comes over to see Cookie. Cookie tells him his campaign manager was blocking ’cause her “cookies” ruined his campaign announcement. He promptly fired that guy via text. Awwwww that is soooo sweet! Angelo is unbothered! Still Cookie is trying to be rational and think ahead and doesn’t want him to lose the election because of her. I mean that is a legit possibility even in the fake world that is Empire. She tells him to go because she doesn’t want to cry in front of him. GIRL I KNOW RIGHT?? Isn’t that THE WORST! Ahem… 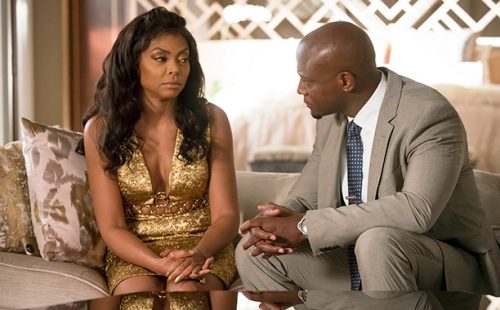 (19) Shady angry gay producer dude has a reason to be angry now, all the tracks are gone and they are locked out of the system. Jamal over there still sweating and now got the shaky hands cause withdrawal is a motha! Tells producer dude “fck it we gon’ go old school, analog in this bish” (paraphrased), tells him to figure it out and he storms off. Wonder what he left to go do…

(20) Lucious mad cause people were talking ish about him via email. Sounds a bit like the guy planning to move into the White House next month doesn’t it? Sigh.

(21) Cyber dude found a “keylogger” – some tech ish. Lucious and Dre storm off to go get some intel from Tiana. Turns out Gram had been in the studio with her. Turns out he’s a tech dude. Turns out he HATES Empire. And viola, the hacker has been identified. That’s yo asssss Lil Romeo…

(22) In true “oh shit, it’s about to go down” style, Lucious, Dre and a bodyguard are waiting in Gram’s living room when he walks in with a very large piece of pizza. Great, now I want pizza. I miss NY. Anyway, they exchange a lot of dialogue. Yada yada, blah blah blah. Gram said he ain’t do it. But this part:

Gram: “Since y’all so convinced, what are you gonna do? Call the cops?”
Lucious: “That’s what white folks do.”

Sorry not sorry I chuckled loudly. Then the goons, led by Shine of course, walk in. This lil cornrowed fool tried to run. Boy where you going? A fool and his face, soon parted. Smdh.

(23) Lucious holds an event for the staff at Leviticus. For the leadership efforts he has displayed, Dre is being promoted to President of Empire XStream. Good for him. Next we find out that shady white boy did in fact play the fck outta Becky. He took FULL credit for releasing that Tiana track and now he’s officially the head of A&R. Again she was the only one who didn’t see that coming. Becky in the wings MAD! She was ready to go stomp him but Thirsty told her to pump her brakes there’s another way to handle this. Good. Get him.

(24) Sure enough Jamal is at home in full struggle mode. Drinking AND pilling. He tried to reach his coach first, the legit dude a.k.a. Phillip, but he ain’t answer the phone and ‘Mal ain’t leave a msg. Then he called shady angry producer dude a.k.a. D-Major and left HIM a message. Sigh. Folks stay reaching out to the wrong person. 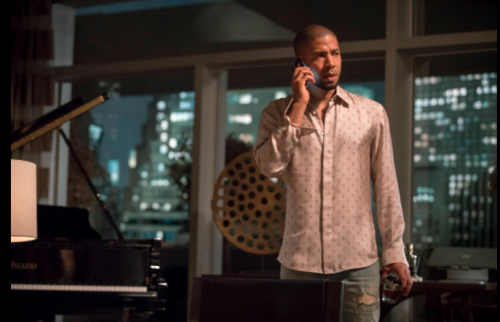 (25) Nessa and Hakeem perform the song they were recording in the booth earlier “I don’t want nobody else but you.” Nessa singing to Dre. Hakeem mad. Y’all see Thirsty’s dance moves? Was making me seasick.

(26) Of course D-Major shows up. Jamal high af. He is flying. Rambling on about his family and secrets and setting everybody free. So so HIGH! #ThatsTheLight #NewDirection

(28) Meanwhile over at the FBI, Tariq and a partner are pouring over the leaked emails. Of course Tariq finds something. Appears to be a payment that occurred a few days after Frank got murked in jail.

(29) Back at Jamal’s the situation is NOT good. D-Major tries to wake him but Jamal is out. It ain’t clear yet whether or not he OD’d, is in a coma, or just blacked out but D-M is rightfully shook. This fool called Phillip instead of 911. I mean I kinda get why but ummm death yo. Phillip shows up, figures out that Jamal blacked out and puts him in the shower. Jamal wakes up in a panic. Right.

(30) Angelo is getting harassed by the press. He goes full disclosure and tells them Cookie broke up with him today ’cause they were making it impossible for them to be together (or something like that). THEN in a show of swoon inducing solidarity he takes off HIS shirt so she wasn’t the only one showing skin that day – only his shirt though we didn’t get a peek at the bottom half. Boooooo! #Jokes 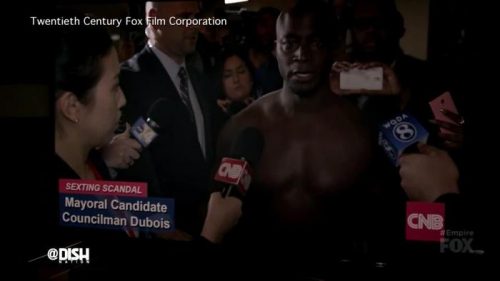 (31) Last but certainly not least we discover that ANDRE was behind the hack! The intrigue don’t stop. He took Nessa with him to drop off the payment to French Montana for facilitating the whole thing. Well damn they DID set Gram up. Andre is RUTH-LESS, just like his daddy. He also looked a little ridiculous in that hat but I digress. I don’t know why he took Nessa with him, she ain’t Rhonda – that’s A LOT of trust dude. And he was talking to Nessa about Rhonda approving of him and Nessa. I mean we caught that from the threesome (which I STILL haven’t recovered from) but it’s still weird. He needs to focus on keeping the bi-polar at bay. Fo’ reals.

Coming Up: More of Cookie’s backstory! 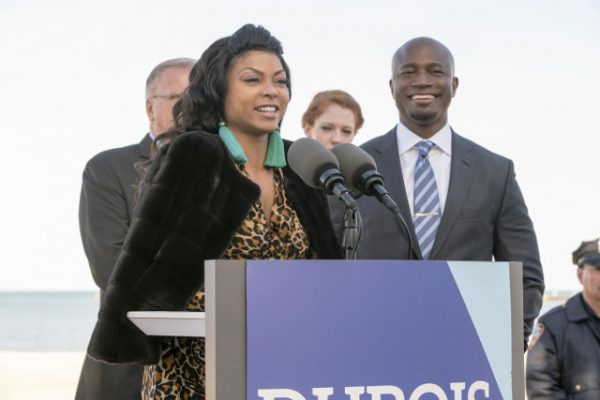 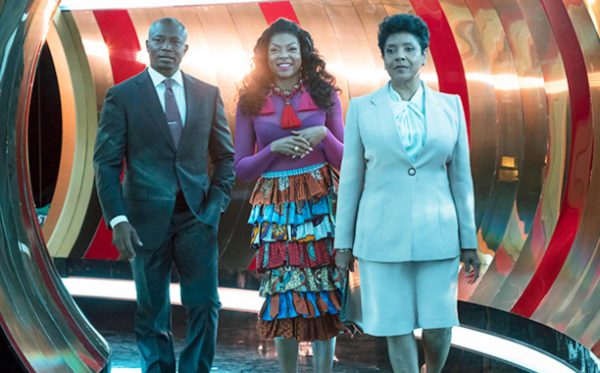