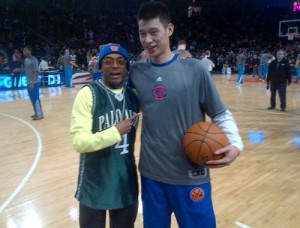 But at this point who ISN’T in love with Jeremy Lin? Weelll maybe the guy that got fired and the guy that got suspended aren’t big fans right now but hey you can’t blame Jeremy for YOUR stupidity.

If somehow you missed this, after the Knicks lost to the Hornets, the phrase “a chink in the armor” was used on three separate occasions on ESPN tv, radio and online. There was an uproar. The editor who posted the headline online was fired and the anchor who said it on the air was suspended. Everyone involved has apologized and Jeremy is keeping it moving. He has basketball games to win and zero time for bullshit off the court. Don’t worry J Lin, the public has your back. Literally. 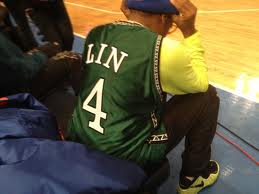 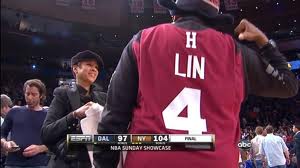 “Birth Control? LADY, what do YOU know ’bout birth control??”

This birth control debate has taken turns that few people could have foreseen coming. I showed you the picture of the panel of men testifying on the issue at a congressional hearing last week. A “panel of MEN”?? – REALLY??!!?? Speaking of “Really” SNL took a turn at the issue as well:

In case you didn’t watch the video Seth and Amy also mentioned the quote from Foster Friess, the billionaire who is bankrolling Santorum’s antiquated platform:

“Back in my days they used Bayer aspirin for contraceptives. The gals put it between their knees and it wasn’t that costly.”

Yep, he said that and now he and Santorum are saying he was just joking. AND Santorum is also saying that this is another example of the liberal media engaging in “Gotcha” Journalism.

It is sad that I have to point this out, but Rick lemme explain something to you. No one set him up to make that insane statement. There was no sting operation, no series of tricky questions, no clever editing. It was a straightforward interview. Andrea Mitchell asked him what he thought about your comments on certain issues and whether or not your responses would hurt you in a general election. That crazy ass quote above was a part of HIS response. Is it bothering you that people keep bringing it up? Well Rick it was a TERRIBLE comment! In addition to the overall lunacy of his statement, he used the word “gal” – GAL?!?

Once again I feel the need to remind YOU that the year is 2012 and not only are WOMEN (not GALS) allowed to vote, we are allowed to speak our mind and here is me speaking mine:

I flat out do not like you. I believe that you are naive, judgemental and not very bright. Also, I do not believe that your kind of leadership is what is best for our country. I am appalled that you have a national platform and that you are still “in the running” for the highest office of the land. My only solace is that I trust that by the end of this year you will have gone the way of Sarah Palin – a reality show train wreck.

Whitney’s funeral was – honestly I’m not sure what to say because I don’t want to say “it was the best funeral EVER” cause gee that’s not a good thing to say about a funeral and clearly if I were a family member or close friend I certainly wouldn’t feel that way. Trying again, I can just say that it was REAL. I was aaaaallll on facebook and twitter Saturday morning with this so I’ll just quote myself:

I LOVE Reverend Marvin Winans!! This is a REAL Funeral, ain’t no carefully crafted Hollywood production and ain’t nobody thinking ’bout no live coverage. This is for the family and friends. We sending Nippy Home!!! YES!!

I cannot express how much I appreciated the decision to live stream it so fans could share in the moment. BeBe Winans was the first person to break my resolve to not cry, Kevin Costner’s heartfelt remembrances brought a smile to my face and Reverend Marvin Winans made me jump off the sofa in praise and believe me that is saying A LOT! I loved this moment:

The handling or “mis-handling” of Bobby Brown’s presence was beyond unfortunate. I’ve gotten a little more information and as one of my friends pointed there are three different versions of what happened and the truth lies somewhere in the middle. Regardless of the who, what and why, I truly wish it had been handled in a different way. They were married for a long time, he is the father of their only child together, she was a stepmother to his children and there will not be another funeral. Someone with a cooler head should have made a blanket decision about the situation and kept it moving. I do feel like this incident was the only “hollywood” aspect to the ceremony.

Say what you want about him and their marriage but you cannot question the fact that he is grieving right now just as much as anyone else. I really do believe Whitney was the love of his life and how could she not have been when she meant so much to so many people who never even met her?

I don’t know about you but it is time for me to move on. I will continue to play her music, happily singing loud and off key (we did a mini-concert at a karaoke bar saturday night) and remain in awe of her great talent.

I don’t care what reports come back, it won’t matter. I’m not dismissing her darker moments but I’m not going to dwell on them either. She’s gone too soon and that’s the real tragedy. I can only hope that she is finally at peace. Now excuse me while I take a moment to watch/listen to “My Love is Your Love” – you might want to take a re-listen as well. Go ‘head, gets to clicking.  🙂

“If I should die this very day
Don’t cry, ’cause on Earth we weren’t meant to stay
And no matter what the people say
I’ll be waiting for you after the judgment day”