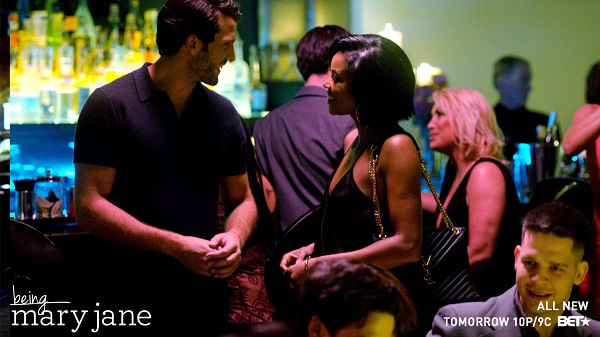 (2) Took me a second to figure it out but yes they are sexualizing my president! Tanika Ray’s character went all the way there talking about being on Air Force One and wearing her Air Force Ones to handle all of that “turbulence.” Bish please, thankfully MJ said it, “I hope the First Lady whoops yo a*s” and if Michelle doesn’t I just might for you even saying it. Have some damn RESPECT!! #Blasphemy (Yeah I might feel some kinda way)

(3) Raise your hand if you don’t believe Kelly Rowland as an anchor/journalist or as Lucious’ mom. Right. But she’s very pretty isn’t she? #Motivation

(4) I do love all of them jumping into fly a*s rides as they’re leaving the club. Not that I expected anything less but it is nice to see. 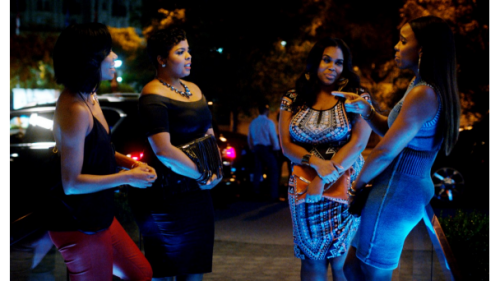 (5) MJ spots her white dude getting out of his car and entering the club. They exchange glances but don’t speak to each other. Wait, did they really not recognize each other?? Or what happens in the club stays in the club and once outside the club #WhoYou?

(6) MJ goes back inside and the bouncer checks her ID again. For why?? Didn’t she LITERALLY just walk out AND y’all have already noted there are only a sprinkling of black people up in the spot. Sorry not sorry I am the person who catches AND thinks about those details.

(6.1) Sidebar: Speaking of details, I think I missed when MJ and Nichelle (Brely Evans) officially made up. I’m talking about Lisa’s death OR was it Lisa’s death that did it. Didn’t they have beef first season? What does she do again?? #IHazQuestions

(7) MJ walks up to the white dude at the bar and he turns and is like “oh yeah you” sooooo he routinely feels up and fingers black women in that club. That’s just what he does??? Sigh. ANYway, of course they start making out again. He wants to go back to MJ’s place OR says she should come back to his place. MJ says “nah bruh.” He asks her name. She says “stop talking.” #NotMad

Soundtrack for this scene: “Drop That Kitty”


(8) The next morning a stylist team shows up. I think Nichelle sent them?? I don’t know his name but Ms. Thang walked in already talking reckless: “Wow she’s cute, even in person.” I think I love him.

(9) MJ is texting with Cutty Buddy a.k.a. Brandon. Ms. Thang peeped the msg and called him “Mr. Thirsty” and then MJ called Ms. Thang “nosey.” Then Ms. Thang says: “I mean your font is on grandma print. Baby the whole block done already read it.” I don’t think I love him, I KNOW I love him! #Hunty!

(10) Ms. Thang proceeds to check and educate her on booty call rules: “It’s all about your timing. Late enough where you don’t have to feed him, but not too late where you’re yawning. Nobody wants to waste their gas on a lazy lay. It’s rude.” #Invoice 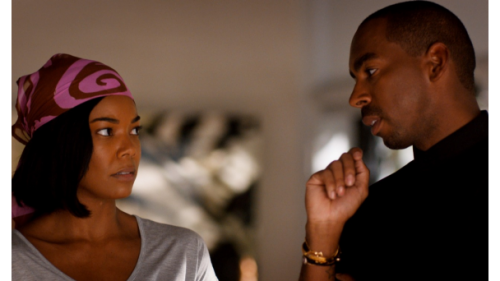 (10.1) Where has THIS guy been?? All of the sudden I’m interested in this show again. I hope he stays.

(11) MJ and Kara have an exchange about MJ going with the flow at work and Kara liking the dress she is wearing and MJ talking ish about the fluffy dog story she just did BUT she’s enjoying going with the flow because now she has a stylist. She turns down Kara’s offer to stay late and go over show ideas and is not concerned about “her voice” and is happy that she and Kara don’t fight any more. #Primetime

(12) MJ went out with someone else? Another anchor? Did I miss that? Y’all just gon’ drop that in there? So she has three dudes in rotation right now?? #IHazMoreQuestions

(13) Kara does indeed stay late but has a mini-break down at her computer. #BeingKara #FindingKara #KaraNeedsAVacay 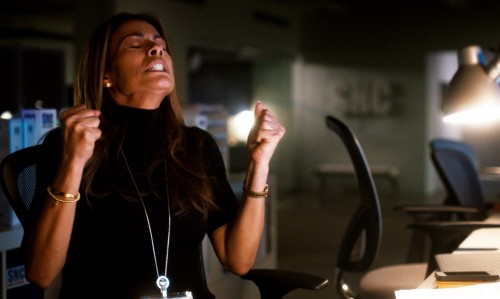 (15) Omg! Brandon is having a seizure. O.M.G! MJ finally notices and springs into action but it has subsided. She comforts him. Damn that is rough.

(16) She relays everything to Kara the next day and is of course like ehhh “seizures are not sexy.” And she noted: “He’s not my boo, he’s someone I do.” #NoObligation

(17) Everyone at the network gets an alert with a tabloid image of Mark and his “blurred out penis” getting a hand job in the parking lot outside the club. At least I think that’s what was happening. His pants were pulled down to mid-thigh and you can’t see the guy’s other hand. Sordid! #TskTsk 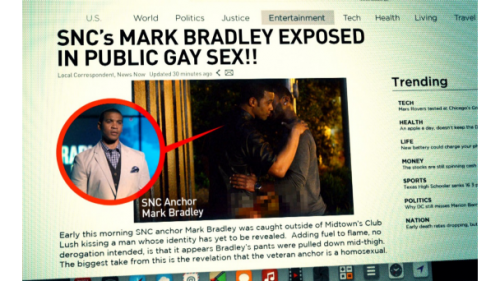 (18) MJ congratulates Mark on being “very well endowed” and brings up Michael Sam forcing America to have a convo about gay men: “Gay is the new black.” Mark is offended: Gay is not trendy! MJ says “it kinda is.”

(19) Mark gets called into Greg’s office. Y’all know how I feel about Greg even when he’s trying to be a “decent” person #StillWack

(20) Greg has brought in an eager and smiling fella from marketing – Jacob, V.P. of Marketing, to be exact. He tells Mark they’ve developed a “coming out” campaign for him. They want to bridge LBGTQ issues and foreign policy. Mark is less than enthused #Understatement

(21) Mark is NOT interested in being the face of gay politics. Apparently he had an overseas trip planned to Syria and Nigeria. Greg is like there is NO WAY IN HELL we can send you overseas now. You gay homie and they literally kill gay people in those parts. #NotGoing!

(22) Mark is tripping talking about he’ll pay for everybody to go, himself, a body guard, the entire crew – he’s willing to foot the bill for e’rythang. #Tripping!! 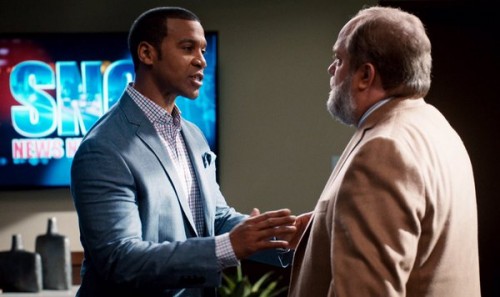 (24) Next up, Goldie Taylor (and Antonio Casales) are on Primetime debating about immigration reform. Goldie was over there dropping truth bombs about voter suppression and real political power. #LoveGoldie!

(26) Show wraps and Goldie calls MJ out about that surface show she just taped: “We need you highlighting our issues, sis” MJ: “Welcome to Primetime.” 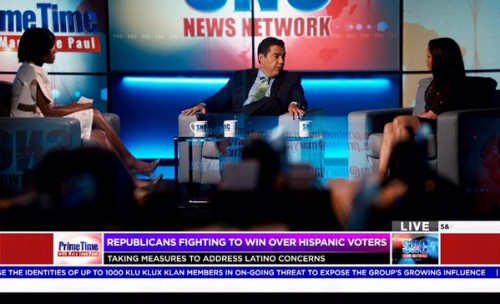 (27) Greg goes to MJ to get her to convince Mark to stay. MJ notes how hard Greg is fighting for Mark. He tells her that he fought harder for her. She apologizes to Greg. Whatever, I still don’t like him. “White guys might not be so bad after all” Greg but I’m going to need a few more episodes before I come around on you. #Hmpf

(28) Kara and Marisol have another confrontation. It got HEATED! Exchange about quotas, setbacks, working like a dog for low pay, “looking like a freaking chaquita banana”, mentorship, encouraging girls to buy books or crotch-less panties.” Wow. Kara is scary y’all. 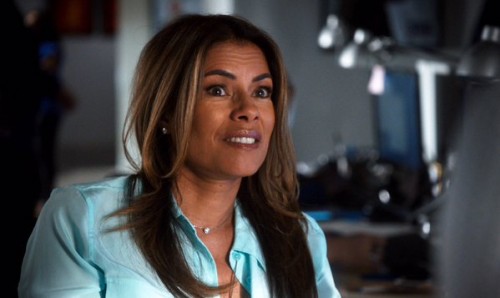 (29) MJ talks to Mark about not quitting. Mark doesn’t have a problem doing the “all black thing” but he does have a problem “doing the gay thing” / “Race and sexuality are not the same.” MJ has jokes, Mark gets offended (again). MJ apologizes. Mark is super sensitive right now. MJ says she is concerned about his safety re this overseas trip. Mark points out that he can’t wear a hoodie and walk down the street in America. MJ cracks another joke. This time Mark laughs. Finally.

(30) Brandon hits up MJ in the middle of the night. She tells him to come through. They get started in the kitchen and MJ stops. “We gotta talk about these seizures dude.” They argue. Brandon is super agitated about the seizures. He’s trying to get back on a team and tryouts are coming up. MJ says he can do something else, go back to school, etc. Brandon tells her she doesn’t know what she’s talking about, football is all he has and he basically storms out. Was kinda dramatic.

(31) Nichelle comes back over. She and MJ have a convo about sleeping with white boys (baloney pony? word??), how much sex is too much in one week, being good at blow jobs, hoe thresholds, resetting your hoe button, international hoe laws, there was a “yaaaasssss” in there, an impromptu “ratchet” song, a high five and a mantra: “be strong and wrong.” I wanted to roll my eyes but I didn’t!! I really didn’t do it. You guys would be proud of me.

(32) Sidebar: So BET really only has this one trailer for this Westbrooks show?? Just the one??? Isn’t it airing by now???

(33) Quick visual of Mark in the studio with a voiceover revealing his convo with Greg about going overseas. The network still ain’t trying to hear that nonsense. Mark says if he is killed it’ll be good for ratings. #GoodPoint

(34) Mark and MJ are back in MJ’s house discussing Mark’s trip and SNC. Mark is talking about his dignity and how he used to be excited about going to work. Says he’s just gonna do it, hire his own team and just head to Lagos. Okay bruh. 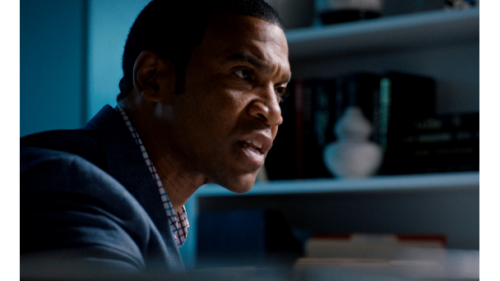 (35) MJ is no longer interested in trying to save the world and asks Mark if he still thinks it’s worth it. She’s ready to stop fighting and live a little: “We’re well paid puppets. And? I’m a B-list celebrity and I like it, I love it. And you know why? People don’t care about the truth. Audiences are half asleep and I am exhausted.” I hear you ma.

(36) She keeps going: If she talks about a cure for cancer, someone wants to hear about a Kardashian, ever since she joined Primetime she stresses less and sleeps more, she is enjoying the perks, the accolades and people finally catering to her for once. She might be a sell-out but she’s finally getting what she wants. Mark is indignant. “I’m not giving up and I’m not selling out.” Well good for you Mark. At the moment believe it or not I am not mad at MJ. #Woosah

(37) MJ goes back to the club. She orders a drink and the bartender asks for her membership ID. Unless you need that for my tab once I’m inside wtf are you asking for it again? Do they need a private club consultant on this show?? Again details… And yes NOW I am rolling my eyes!

(38) Sexy white dude figured out who she is. MJ tells him that he’s ruined it. He says “we’ll see.” Ooooooohhhkaaaay! I see you white dude, I SEE YOU!!

Coming Up: MJ’s birthday and a confession to pops. Mo drama. 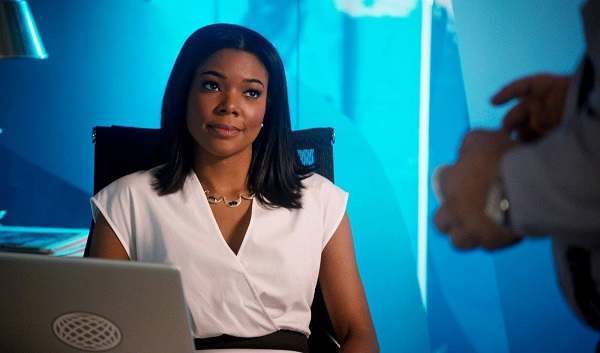 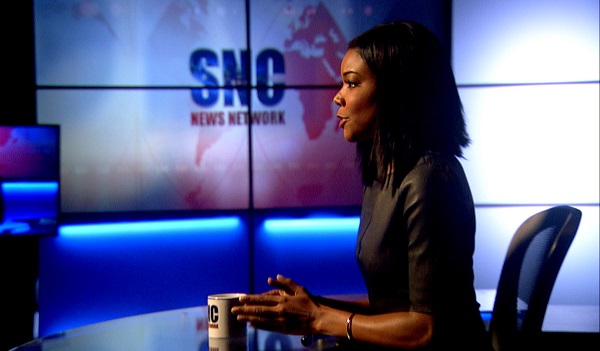 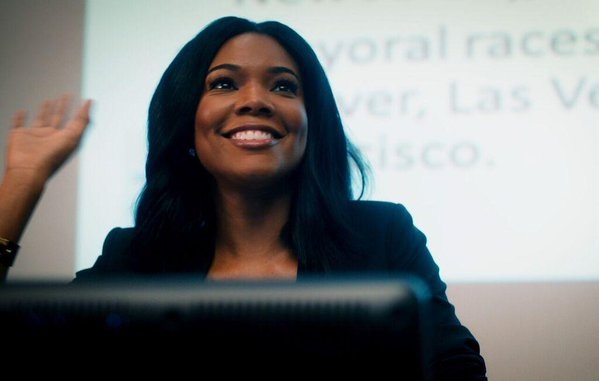