(4) Why Pharrell’s shoes look like someone wrote “Chanel” on ’em w/ a sharpie?

(5) Why Chris Rock walk on stage like somebody’s daddy?

(7) Chris was ON Rick Ross ’bout that weight all night. Has he not seen Ricky Rozay recently? I ain’t saying he’s skinny now but he’s lost at least one full person right?

(9) Can we please reflect on the fact that “Prison Bae” (a.k.a. Jeremy Meeks) who is currently sitting in JAIL with a 1M bail GOT A SHOUT OUT AT THE BET AWARDS??!!? You can’t buy the type of publicity he’s getting. Dayum!

(10) Who is this August Alsina negro who was not prepared to go on stage?? Have NEVER heard of him #SorryNotSorry

(11) I don’t think I can express how much I have grown to dislike Lil Wayne. At least he didn’t have on jeggings last night.

(12) I spy a shirtless man on the drums. Guess it was hot back there or somebody just decided to be “extra”.

(13) T.I. and Tiny sitting together like “what drama?” #TheFamilyHustleYo

(14) Really Nick w/ the mustache, the chin hair, the afro AND the afro pick?? Is he shooting a movie right now? No for real, TELL ME he’s in character for something, anything! (16) EVA HAD A BABY 4 MONTHS AGO AND WAS ROCKING THAT DRESS? GOLLY!!! So she isn’t breastfeeding? #ButThatsNoneOfMyBusinessTho

(18) Although I would have preferred a suit, I will take T.I.’s prep boy shoulder sweater look over Busta’s bloated Toucan Sam look ANY day!!!

(20) HOL’ UP! Who’s idea was it to (a) make Mike Tyson a presenter last night AND (b) allow him to HOST the Soul Train Awards??!!?? Is that really happening? Was he spoofing us?? Did he threaten someone???? #SoManyQuestions

(a) But are you paying child support tho?
(b) But did you marry ANY of your baby mommas tho?
(c) But who is raising your kids w/o any help from you tho?
(d) But who put money on your books tho?
(e) But who REALLY paid for the studio time?
(f) But who ACTUALLY paid for the bottles at the club tho?

(25) WTF was on Usher’s head? Him and Pharrell on some insane hat game. Looking like he just left Davy Crockett’s ranch.

(26) Don’t get me wrong I like Usher, I do, BUT I didn’t need a full medley of his entire discography – a medley from the current album would have been just fine ’cause that’s all I really wanted to hear anyway #JustSaying

(27) The “Oliver” Pope bit was funny. Bet money Kevin Hart trying to figure out a way to show up on Scandal next season. Maybe avenge Harrison’s death? Can he get through a scene w/o cracking jokes? #Hmmmm

(28) Beyonce had two vids in the best video category… #FallBackItches

(30) JHud looked and sounded dynamite (but y’all know that initial intro in the hallway was just weird). Also glad none of those skaters bite the dust #CauseThatWouldaBeenMe

(31) STILL trying to figure out who August Alinsa be. Seriously, I don’t know NONE of his music. I also kinda don’t really care so never mind.

(32) Sidebar: Is it just me or do you think Trey Songz and Terrance J are the same person also?

(33) Definitely appreciated the Lionel Richie tribute. Lots of hair and lots of colors, you GOTTA love the 70s! #TheCommodores (34) Who was that woman sitting next to Lionel? #DishPlease

(39) I love that the song that made Snoop get out of his seat was “I Wanna Sex You Up” #ColorMeBadYo! 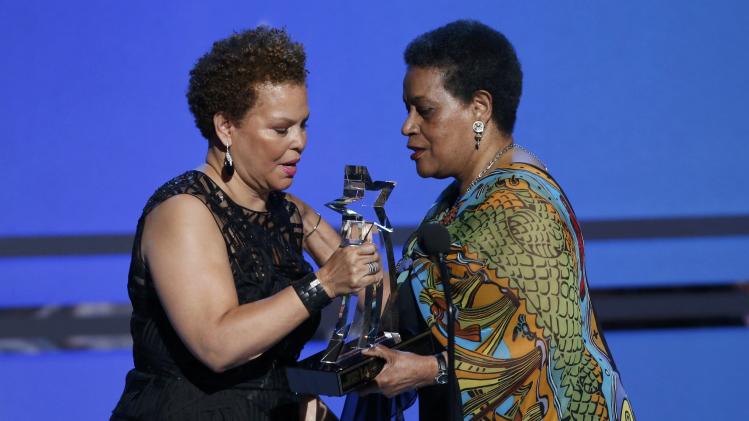 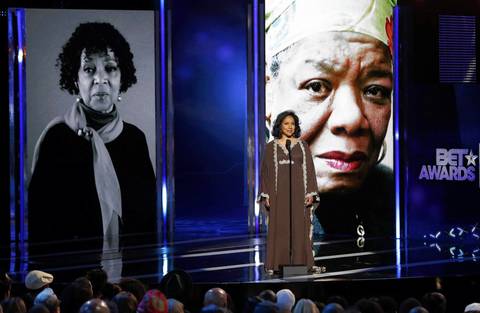 (41) Robin Thicke STAY begging to Paula. Ordinarily I would tell you to stick to your guns Paula but hell we are all tired of this, PLEASE give that man another chance. PLEASE!

(42) I had it DVR’d and it went off during Robin’s latest begging performance so I missed the Bey & Jay video and Nicki’s speech and maybe some more stuff but whateves.

(43) I don’t really care if Nicki did shade Iggy but I do know this, every time an Iggy A songs comes on I want to cover my ears with my hands and cry a little #TrueStory

'2014 BET AWARDS #KindaSortaRecap' has no comments